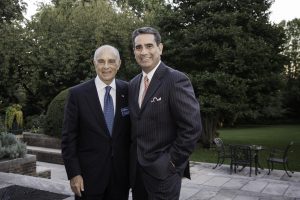 The Honorable Nicholas Taubman, Chairman of the Board, National Museum of American History with Cordoba Corp. Executive Vice President/COO and museum board member Randall D. Martinez during the Museum’s October 19 board dinner.

Cordoba Corporation has announced a pledge of $200,000 in support of Latino history initiatives at the Smithsonian’s National Museum of American History. The gift will allow the Museum to expand its efforts, focus and scholarship on Latino history by highlighting contributions to the political, social and cultural landscape of the United States.

In announcing the gift, Cordoba Corporation’s Executive Vice President and Chief Operating Officer Randall D. Martinez, who serves on the Smithsonian’s National Museum of American History Board, stated, “The Smithsonian Institution has a long history that dates back to 1846, honoring a mission to increase and diffuse new knowledge. In my opinion, a challenge for the Institution has always been the compartmentalization of American history, which results in stories of individual communities disappearing from the national narrative. Our gift is intended to assist the museum in its creative efforts to make the stories of Latinos come to life and resonate as truly American stories.”

Cordoba’s donation will support the work of two curators, Mireya Loza who is based in the museum’s division of work and industry, and Margaret Salazar-Porzio, who is in the division of home and community life. Through the support of Cordoba Corporation, the curators will focus on:

Loza, who earned her Ph.D. in American Studies from Brown University, specializes in labor history, social movements, civil rights, and migration, including her leadership in the museum’s groundbreaking project to examine the bracero guest worker program.  Her award-winning book, Defiant Braceros: How Migrant Workers Fought for Racial, Sexual and Political Freedom, shed new light on the lives of migrant men who participated in the Bracero Program binational agreement between the U.S. and Mexico between the 1940s and 1960s, providing a new perspective to an important aspect of U.S. Latino history.

Salazar-Porzio is a native of East Los Angeles and earned her Ph.D. at the University of Southern California in American Studies and Ethnicity. She has conducted significant work focused on documenting Latino history and culture, including race relations, immigration and civil rights, as well as media studies and sports.  Salazar-Porzio has focused on collecting significant Latino objects to the Smithsonian collections that reflect the rich cultural traditions of California, including artifacts that tell the story of artist Judith Baca, the founder of the first City of Los Angeles Mural Program in 1974.

Most recently, she co-curated the museum’s “Many Voices, One Nation” exhibition which opened in June 2017 and is the co-editor of the companion book Many Voices, One Nation: Material Culture Reflections on Race and Migration in the United States, which explores U.S. history through a collection of artifacts and stories from America’s many cultures.

Salazar-Porzio is currently working on collecting artifacts and oral histories, which will inform her upcoming exhibition on “Latinos and Baseball” focused on the historical role baseball has played as a social and cultural force within Latino communities.

“Cordoba is a company known for ‘Making a Difference’ by designing and constructing a built public infrastructure that improves communities,” explained Mr. Martinez. “We also strive to make a difference in the arts and humanities by supporting cultural, civic and philanthropic organizations that shape the intellectual and social infrastructure in these communities. Our donation to support Latino history initiatives at the Smithsonian is especially meaningful and relevant here in California, where so much of our culture has been influenced and enriched by the presence of a significant Latino population”.

About Cordoba Corporation:  Cordoba Corporation is a California-based statewide full-service engineering, program and construction management firm specializing in the delivery of infrastructure projects in the transportation, education, water and energy sectors, and is recognized by Engineering News Record (ENR) as a ENR Top 50 Program Management Firm and Top 100 Construction Management-for-Fee Firm.

About the Smithsonian’s National Museum of American History:  http://americanhistory.si.edu/