Cordoba Corporation is pleased to celebrate #EngineersWeek by highlighting the experience, skills and insights from some of our talented engineers. These team members are serving in a wide variety of positions on projects across the state and represent different viewpoints, disciplines and experiences. They join our entire Engineering Team in celebrating #EngineersWeek and Making a Difference for our clients and communities. 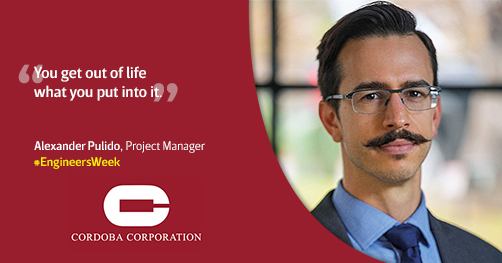 Alexander Pulido is a Project Manager at Cordoba Corporation, where he is currently providing project and program management leadership on San Diego Gas & Electric’s (SDG&E) Pole Risk Mitigation and Engineering Program. He is an experienced engineer and has supported other major projects and programs at SDG&E, including power transmission and distribution fire hardening projects. 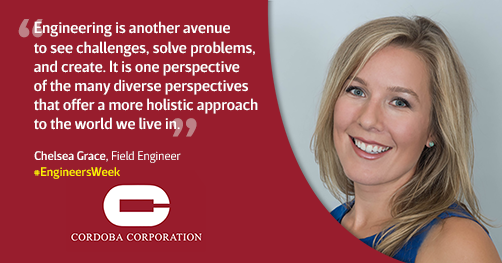 Chelsea Grace is an experienced Project Manager who brings unique experience to Cordoba Corporation from her past work for the Department of Defense in Naval ship maintenance and repair.

Chelsea spent 11 years working at the Puget Sound Naval Shipyard in Bremerton, Washington, Yokosuka, Japan, San Diego, California, and various other bases around the world. She was fortunate to work with thousands of people from diverse backgrounds; skilled journeymen and women, brilliant engineers, diplomats, and strategists from multiple governments, government agencies, universities, and private businesses. She started as an Environmental Engineer, where she managed industrial waste and eventually the Pollution Prevention Program for the naval shipyard. Her most influential job was leading an innovation network – facilitating expert mechanics, engineers, and warfighters to invent new ways to design and maintain aircraft carriers, and then bringing those ideas to life to make work safer, reduce environmental impact, save millions of dollars, and thousands of hours in labor.

Chelsea earned her M.B.A. with a Certificate in Finance and a focus on Sustainable Business from Bainbridge Graduate Institute. She earned a Certificate in Organizational Leadership from Olympic College and her B.S. in Chemical and Biological Engineering from Montana State University – Bozeman, where she was a member of Tau Beta Pi, Engineers Without Borders, the Society of Women Engineers, and most importantly, local ski areas Big Sky and Bridger Bowl. She also caught some beautiful rainbow trout with flies she tied from her Grandpa’s fly-tying stash. She is a registered Professional Engineer in the State of Washington. 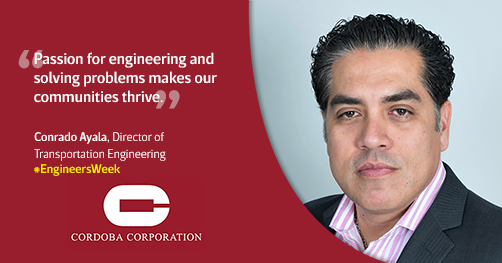 He is currently serving as Cordoba Corporation’s Director of Transportation Engineering where he oversees Cordoba’s Engineering & Design Center Team in our Santa Ana Office. This integrated team supports several key design and engineering projects that span all four of Cordoba’s sectors. In addition to leading the Engineering and Design Center, Conrado provides leadership and support to the City of Pico Rivera, the City of Los Angeles Bureau of Engineering, and other Cordoba clients on infrastructure projects.

Conrado is experienced in site-integrated life-cycle support, including planning, design, construction, and operations. He exemplifies Cordoba’s philosophy of “Making a Difference” for his clients by developing infrastructure that improves communities.

Conrado earned his B.S. in Civil Engineering at USC and his M.B.A. from the Peter F. Drucker Graduate School of Management. He is a Certified Construction Manager (CCM) and LEED AP. 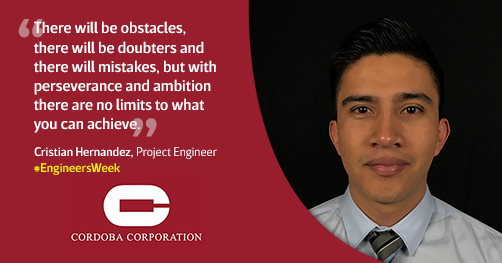 Cristian Hernandez is supporting a variety of projects at Cordoba Corporation, including analyzing air quality data for the Los Angeles Department of Water & Power regarding its operations at Mono Lake.   In addition, he is currently working on a project supporting the Imperial Irrigation District by evaluating feasible and cost effective options for treatment and management of cooling water for one of the District’s generating stations.

Cristian has also provided technical support to the City of Los Angeles Bureau of Sanitation’s Safe Clean Water Program. His work has included supporting the development of a screening tool to evaluate and prioritize hundreds of proposed stormwater capture projects across the City of Los Angeles. He analyzed relevant quantifiable criteria, including FEMA flood zones, census tracts for disadvantaged communities, load reductions and infiltration areas, and created an ArcGIS map used by the team to analyze projects at any level of development. 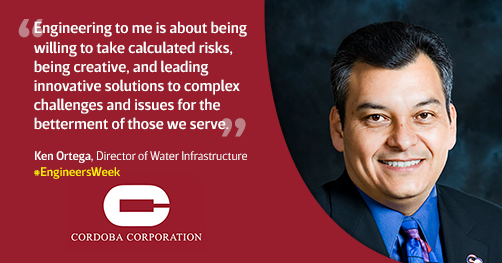 Cordoba Corporation is pleased to welcome Ken Ortega as its new Director of Water Infrastructure. With more than 30 years of experience and leadership in the public and private water/wastewater industry, Ken is a Civil Engineer with a solid track record of building high performance teams and delivering superior results. His experience includes serving as a water resource consultant, an investor-owned-utility supervisor, a full-service and contract cities department head, a special area district manager, and an engineering company designer and project manager.

Ken previously served as the Assistant General Manager of the Water Replenishment District (WRD) of Southern California. Prior to his role at WRD, Ken served in several key positions at the City of Oxnard, including Water Superintendent and Public Works Director. Earlier in Ken’s impressive career, he worked at the City of Santa Paula as Assistant City Engineer/Deputy Public Works Director, and as Engineering Supervisor/Assistant General Manager at Santa Paula Water Works. Ltd. He also brings extensive water resources and engineering consulting expertise from managing his own consulting and management company. 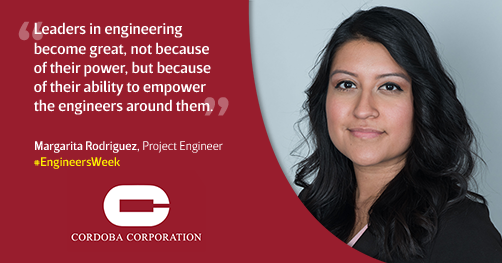 Margarita Rodriquez is currently serving as a Project Engineer supporting the City of Los Angeles Bureau of Sanitation’s Safe Clean Water Program. Margarita has supported this program by developing GIS technical reports and heat maps focusing on watersheds and water bodies for this program, as well as providing document control services for the team.

Margarita’s past experience includes serving as a Management Field Intern for the Metropolitan Water District of Southern California where she was responsible for supporting a chemical unloading facility project. Margarita’s role involved verifying construction and engineering drawings, working with subcontractors, developing cost estimates and contract amendments, and overseeing the project’s Storm Water Pollution Prevention Plan with the general contractor. She also was responsible for monitoring and documenting inventory lists of hazardous chemicals and maintaining Safety Data Sheets for chemicals stored on site.

Margarita earned her B.S. in Environmental Engineering from UC Riverside, where she was active in the local college chapter of the Society of Women Engineers. While at UC Riverside, she participated in various projects through which she gained valuable experience preparing water treatment design technical reports and developing the design for a chemical plant designed to extract ethane from a natural gas source. 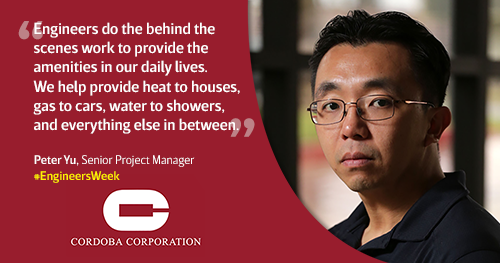 Peter’s experience also includes managing exploration and production projects, including projects at the Port of Long Beach and in Bakersfield, supporting oil and gas industry clients with piping, oil and water separation, well work, and pipelines.

Peter is a registered Professional Mechanical Engineer and certified Project Management Professional. He earned is B.S. in Mechanical and Aerospace Engineering from UC Irvine, where in addition to being active in Circle K International, he was also a member of the ASME, Pi Tau Sigma, and the Chinese Association. 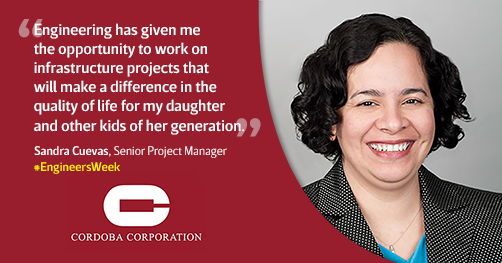 Sandra Cuevas is a Senior Project Manager at Cordoba Corporation, where she has worked on large-scale transportation projects throughout southern California. Over her 20-year career she has provided expertise in program management; transportation planning; roadway and rail project design; cost estimating; and construction support.

Sandra provided program management services in support of the California High Speed Rail Program. She served as Project Manager for the Los Angeles to San Diego section overseeing planning activities and early environmental analysis. Sandra also served as deputy Project Manager for the Burbank to Los Angeles and Los Angeles to Anaheim section of the program helping oversee the development of the environmental document, preliminary design and contract management.

In Orange County, Sandra supported the Design Team that developed the alternatives analysis for the OC Streetcar, and she provided leadership on outreach and coordination efforts with the cities in Orange County relating to the Orange County Transportation Authority’s GO Local Program.