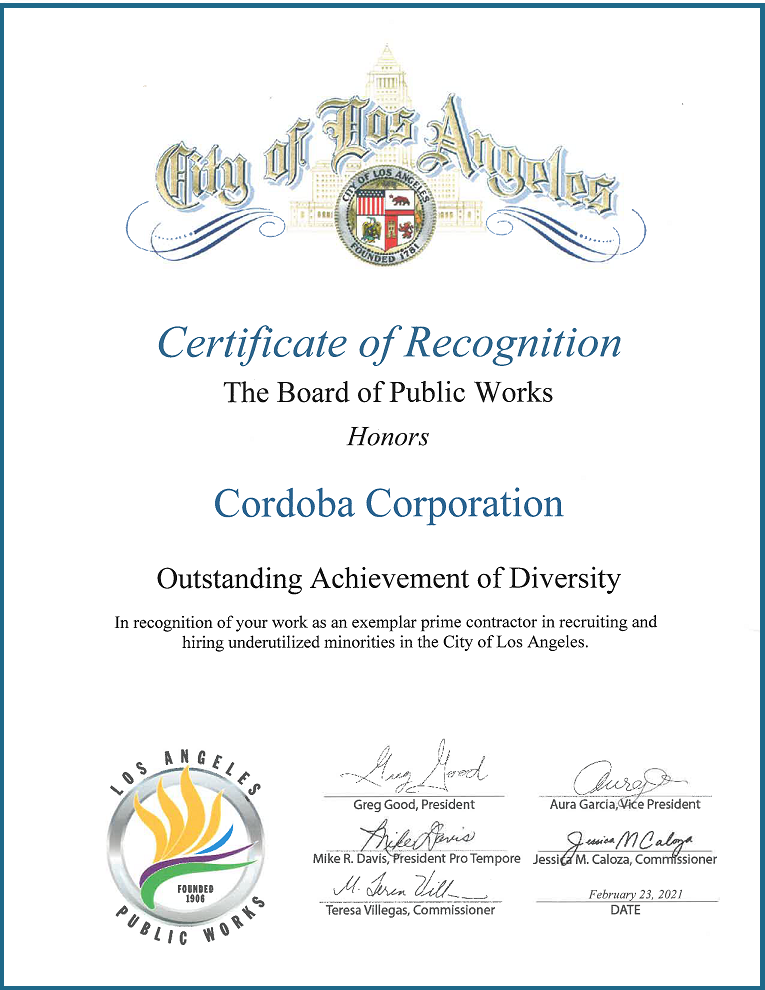 This annual award presentation is spearheaded by Board of Public Works President Pro Tempore Dr. Mike Davis in recognition of African American Heritage Month.  Dr. Davis led the discussion and introductions of Mr. Martinez and executives from Wood Environment and Infrastructure Solutions, Inc. and Harris and Associates, two additional companies recognized by the Board of Public Works.

In his acceptance remarks, Mr. Martinez stated, “Cordoba Corporation is a minority-owned  firm based in Los Angeles. We ‘grew up’ in the City’s small business subcontracting programs. We are thrilled to now participate as prime contractor and we are a living embodiment of what these programs are intended to be.”

Mr. Martinez further explained that Cordoba Corporation owns its Los Angeles headquarters near Dodger Stadium and is a stakeholder invested in the community.  In addition, he shared about Cordoba’s growth over 38 years in business with approximately 450 employees in eight offices across the state, and provided statistics regarding Cordoba’s employee diversity, including the following:

Cordoba Corporation earned the recognition from the Board of Public Works for its work as a prime engineering contractor on the City of Los Angeles Bureau of Engineering “Safe Sidewalks LA” Sidewalk Repair Program for which Cordoba’s Design Center Team is providing design and engineering services.  This $1.4 billion program is committed to repairing sidewalks and improving accessibility across the City’s sidewalk network.