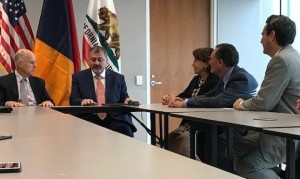 Cordoba Corporation’s Managing Partner & Chief Financial Officer Maria Mehranian, who serves as President of the Armenia Fund. Inc., accompanied dignitaries from the Republic of Armenia as they were welcomed by Governor Edmund Brown, Jr. yesterday as the 188th jurisdiction to join the Under2 Climate Coalition.

Former State Senator Dean Florez, who currently serves as a Board Member of the California Air Resources Board and has been instrumental in working with the Governor’s Administration to encourage Armenia to join the Under2 Climate Coalition, also welcomed the Armenian dignitaries at the Governor’s San Francisco Office.

The Under2 Coalition is a global pact of cities, states and countries committed to limiting the increase in global average temperatures to below 2 degrees Celsius.  According to Governor Brown, “This is a worldwide movement that can’t be stopped. California welcomes Armenia to this growing coalition and together, we will continue to drive the change that will get us to the climate goals we have to reach.”

With the addition of Armenia, 188 jurisdictions representing more than 1.2 billion people across six continents now comprise the Under2 Coalition.

“We commend the efforts by our partner – the State of California and the Governor Brown, in building this remarkable coalition of governments and peoples concerned about our planet’s future,” said Deputy Prime Minister Gabrielyan.

As a leader in the Armenian-American community and as an environmental policy expert, Maria Mehranian, who formerly served as Chair of the Los Angeles Regional Water Quality Control Board, stated, “I am so proud to see the Republic of Armenia join Governor Brown and other world and civic leaders in supporting measures to create impactful and lasting measures to combat climate change and reduce greenhouse gas emissions.”

George L. Pla, Cordoba’s President & CEO, who served in Governor Brown’s first administration, noted, “We commend Governor Brown for his commitment to Making a Difference here in the State of California, but also for his visionary efforts to tackle the global issue of climate change.  It was an honor to witness the Republic of Armenia join the Governor in this significant endeavor and I salute Maria Mehranian and Dean Florez for their efforts to welcome Armenia into this important coalition.”

About Cordoba Corporation:  Cordoba Corporation is a statewide full-service engineering, program and construction management firm specializing in the delivery of infrastructure projects in the transportation, education, water and energy sectors, and is recognized by Engineering News Record (ENR) as a ENR Top 50 Program Management Firm and Top 100 Construction Management-for-Fee Firm.

About Armenia Fund, Inc.:  Established in 1994 in Los Angeles, Armenia Fund, Inc. is a 501(c) (3) tax exempt, non-governmental, non-political corporation that has implemented over $120 million of infrastructure development assistance and humanitarian aid worldwide.

About Under2 Coalition: The Under2 Coalition is a diverse group of governments around the world who set ambitious targets to combat climate change. Central to the Under2 MOU (Memorandum of Understanding) is an agreement from all signatories to reduce their greenhouse gas emissions 80 to 95 percent below 1990 levels, or limit to 2 annual metric tons of CO2-equivalent per capita, by 2050.