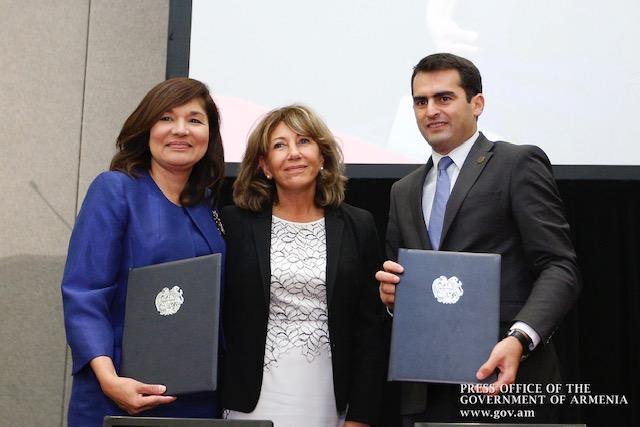 Cordoba Corporation’s Managing Partner & Chief Financial Officer Maria Mehranian spearheaded efforts to bring together the Republic of Armenia and the Los Angeles Area Chamber of Commerce to partner in a Memorandum of Understanding (MOU) to promote trade and high-tech investment.  The MOU was signed and celebrated at an event hosted by Cordoba Corporation during Armenian Prime Minister Nikol Pashinyan’s historic first visit to Los Angeles on September 23, 2019.

Maria Mehranian joined Maria Salinas, President of the Los Angeles Area Chamber of Commerce, and Hakob Arshakyan, Minister of High-Tech Industry for the Republic Armenia, at the MOU signing ceremony where Prime Minister Nikol Pashinyan shared about the exciting opportunities for high-tech investment in the Republic of Armenia.

“I am so proud to be part of this effort to further connect the Los Angeles area with the Republic of Armenia through this MOU with the Chamber.  This will open up opportunities for local high-tech entrepreneurs and innovators, and it will provide new investment in Armenia, which translates into skilled jobs, infrastructure development and more opportunities for the Armenian people. It is a Win-Win for our local community and Armenia,” stated Maria Mehranian.

In her role as Armenia Fund President, Maria has spearheaded several partnerships with the Republic of Armenia.  In October 2017, Maria accompanied dignitaries from Armenia as they were welcomed by former Governor Edmund Brown, Jr. in Sacramento as the 188th jurisdiction to join the Under2 Climate Coalition, a global pact of cities, states and countries committed to limiting the increase in global average temperatures to below 2 degrees Celsius.

She has also accompanied volunteers from Glendale Adventist Hospital on medical missions to Armenia and has joined Congressional delegations to Armenia.  Annually, each Thanksgiving Day, Maria hosts the Armenia Fund’s International Telethon, which in 2018 raised more than $11 million for infrastructure development in Armenia.

A copy of the MOU can be found at the following link:  MOU.

About Cordoba Corporation: Founded in 1983, Cordoba Corporation is statewide full-service engineering, construction management and program management firm specializing in the delivery of infrastructure projects in transportation, education, water and energy sectors. Cordoba Corporation has offices in Sacramento, San Francisco, Chatsworth, Los Angeles, Santa Ana and San Diego, and has been recognized by Engineering News-Record as a Top 50 Program Management Firm and Top 100 Construction Management-for-Fee Firm in the nation, and a Top 100 Design Firm in California.