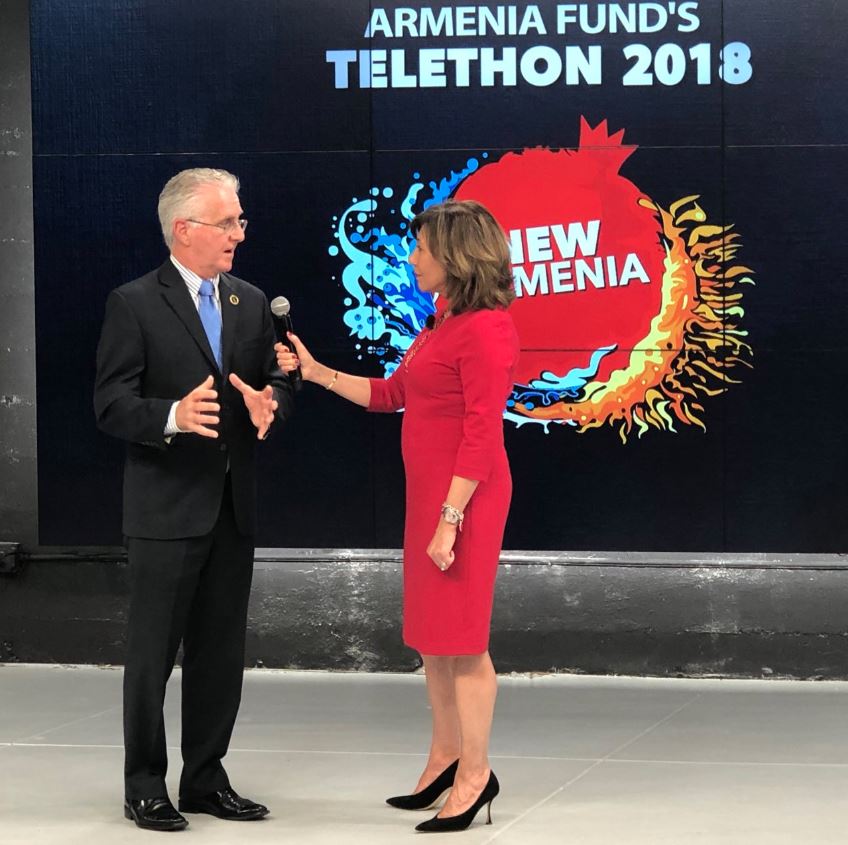 It has been a busy but rewarding autumn for Armenia Fund USA President Maria Mehranian.

Maria, whose official “day job” is serving as Managing Partner and Chief Financial Officer at Cordoba Corporation, has spent her spare time leading the Armenia Fund USA on two of its annual initiatives.  These include the Armenia Fund’s International Telethon, which she hosted on Thanksgiving Day, and the Armenia Fund’s recent Medical Mission to Armenia.

Both of these initiatives focused on infrastructure, which Maria knows well from her experience at Cordoba Corporation, a nationally recognized engineering, program and construction management firm specializing in the development of transportation, education, energy, and water infrastructure in California.  For over 30 years Maria has dedicated her career to building Cordoba Corporation into one of the nation’s top specialty services firms. Honed through her experience overseeing several water infrastructure projects at Cordoba Corporation and her past service as member of the Los Angeles Regional Water Quality Control Board, Maria is a water policy expert in California.  She often serves on water policy panels and as guest lecturer at universities discussing water quality and supply issues, with a focus on stormwater capture, water reuse and recycling strategies, and identification of local water sources.

At the helm of this year’s 21st annual Armenia Fund International Thanksgiving Day Telethon, which has become an annual Thanksgiving Day tradition for Armenians around the world, Maria led the efforts to raise more than $11.1 million to support two major programs aimed at boosting the development of water and solar-energy infrastructure in Armenia and the Republic of Artsakh.  These initiatives include the drilling of deep-water wells and construction of drip-irrigation networks across Artsakh; and the installation of solar-energy systems including solar panels, heaters, and substations throughout Artsakh and Armenia.

Armenian Prime Minister Nikol Pashinyan joined the telethon live from Armenia to donate and encouraged his fellow Armenians around the world to support the annual telethon and these important sustainability and infrastructure initiatives.

“Our sacred mission – to strengthen Independent Armenian Statehood by helping Armenia develop and thrive – has not changed through all these years,” said Maria Mehranian. “Thanks to the generous support of our donors around the world, the Armenia Fund has benefited tens of thousands of our compatriots in Armenia and in Artsakh. Together, we have built roads, provided children with education and care, given drinking and irrigation water to villagers, secured dignified retirement for senior citizens, provided free medical care to patients of all ages, assisted those with disabilities, and secured permanent housing for vulnerable families in the Gyumri earthquake zone and beyond.”

With this year’s telethon, which we themed as ‘New Armenia”, we are able to bring new, innovative infrastructure to support agricultural and renewable energy development to support economic development, job creation and sustainability,” noted Maria Mehranian.

The successful telethon followed the Armenia Fund’s largest medical mission to date in Armenia and Artsakh.  With a focus on providing healthcare services, training and the necessary infrastructure to elevate the professional and technical capabilities of key hospitals in Armenia and Artsakh, representatives from Armenia Fund, in partnership with Adventist Health and Chevy Chase Surgical Center, traveled in late September to Noyemberyan Hospital in Armenia’s northeastern Tavush Region and the Stepanakert Republican Medical Center in Artsakh.  The missions to both hospitals were carried out by a volunteer team of over 68 doctors, nurses and other healthcare professionals from the Adventist Health Southern California Region.  An extensive range of free medical services were provided to approximately 2,650 patients in the Tavush and Lori regions of Armenia and approximately 1,040 patients in the Stepanakert region of Artsakh. 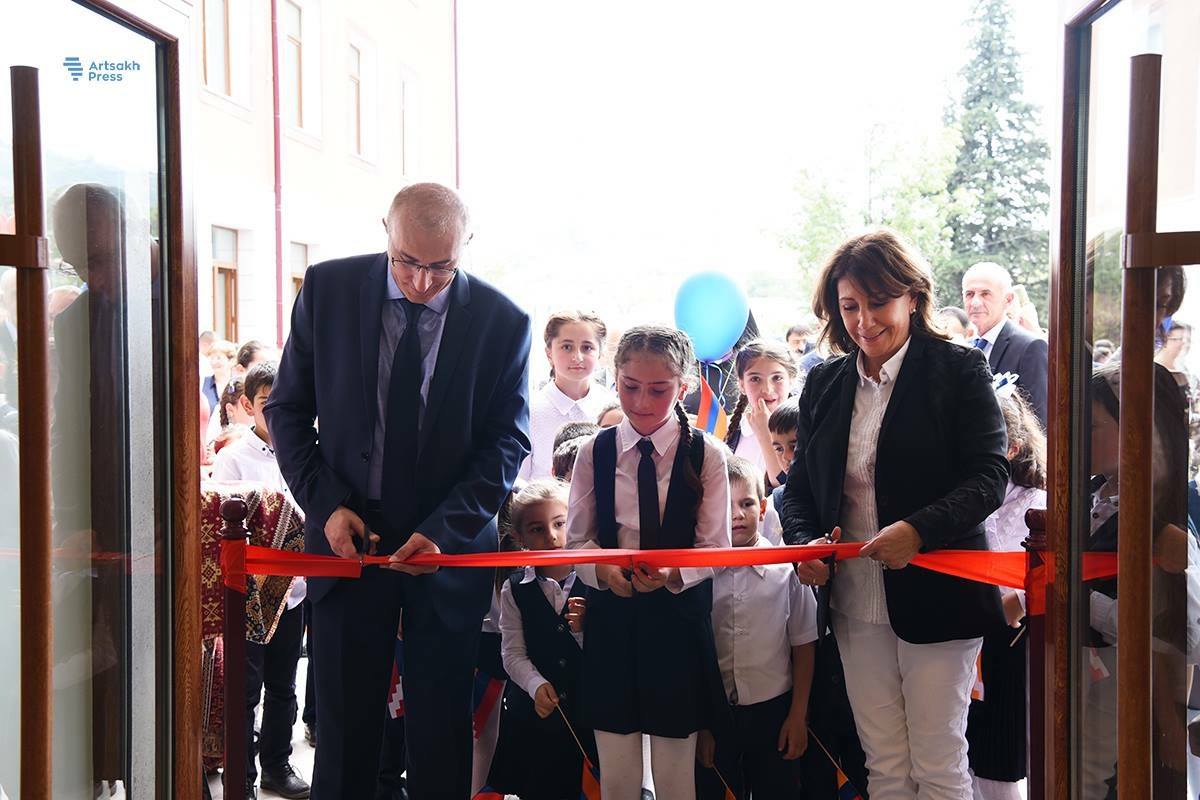 The mission to Artsakh, in particular, resulted in many groundbreaking procedures, including Artsakh’s first-ever brain aneurysm surgery; the first total-knee-implant operations; the first phaco eye-cataract surgery, and many advanced gastrointestinal related procedures that were the first of their kind in Artsakh.  Donated state-of-the-art medical equipment from the Chevy Chase Surgery Center and DJO Surgical contributed to the success of these procedures and will provide the Stepanakert Republican Medical Center the ability to perform similar surgeries and procedures in the future.

“The scale and scope of our 2018 medical mission have been unprecedented, and we couldn’t be happier with the results,” said Maria Mehranian. “The overarching goals of our missions are to help build the capabilities of medical institutions through training, knowledge transfer, and technological assistance, and to provide medical care to economically-vulnerable populations. On behalf of Armenia Fund, I would like to convey our heartfelt gratitude to our project partners, supporters, and each and every one of the wonderful, selfless volunteer healthcare professionals who gave their utmost for the realization of our 2018 mission.”

While in Armenia and Artsakh, Maria also represented the Armenia Fund at various events including the newly reconstructed Stepanakert School #9, where she joined Havastan All-Armenian Fund Executive Director Haykak Arshamyan in cutting the ribbon with the presence of Artsakh President Bako Sahakyan and other dignitaries.

“We are so proud of Maria for her efforts in support of the Armenian-American community here in the US and her support of important initiatives and issues in Armenia,” said George L. Pla, Cordoba Corporation’s President & Chief Executive Officer.  “She truly embodies our core values of Making a Difference.”

About Cordoba Corporation: Founded in 1983, Cordoba Corporation is statewide full-service engineering, construction management and program management firm specializing in the delivery of infrastructure projects in transportation, education, water and energy sectors. Cordoba Corporation has offices in Sacramento, San Francisco, Chatsworth, Los Angeles, Santa Ana and San Diego, and has been recognized by Engineering News-Record as a Top 50 Program Management Firm and a Top 100 Construction Management-for-Fee Firm in the nation, and a Top 100 Design Firm in California.