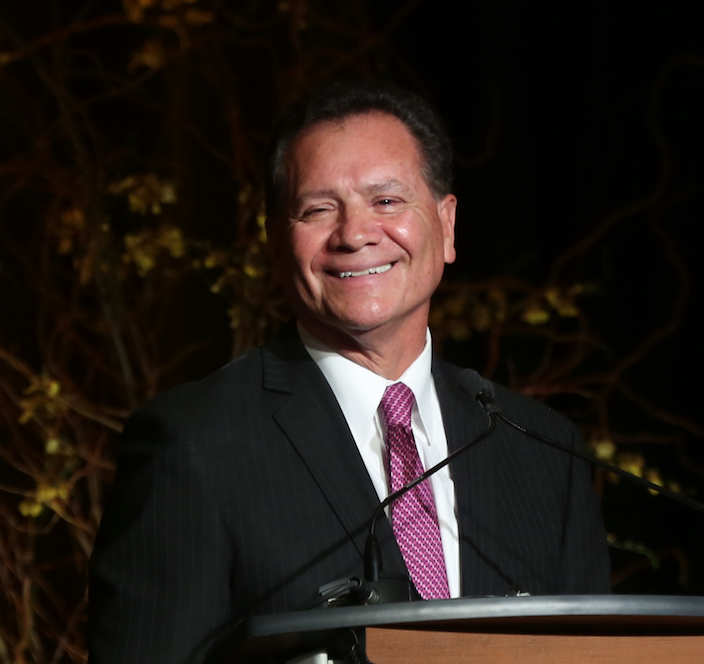 George L. Pla is a successful entrepreneur, best-selling author, and philanthropist whose work spans business and civic activities that hold the common theme of enhancing communities throughout California.

Mr. Pla is the Founder and CEO of Cordoba Corporation, a California-based full-service engineering firm specializing in the delivery of infrastructure projects in the transportation, education, water, and energy sectors. A history of George L. Pla’s founding of Cordoba Corporation and his philosophy of leadership is recorded in a curriculum-based case study by the Harvard Business School.

For nearly 40 years, Cordoba Corporation has worked on complex infrastructure projects throughout California, earning recognition from Engineering News-Record as a “Top 50 Program Management” and “Top 100 Construction Management” firm in the nation, as well as a “Top 100 California Design” firm.

In August 2018, George L. Pla added “author” to his resume with the publication of the formative book on Latino politics, Power Shift – How Latinos in California Transformed Politics in America. Power Shift recounts the origins and development of ten Los Angeles Latino leaders who transformed politics and government, forging a progressive political tradition in the process. While the perspective focuses on Latino politics, Power Shift at its core is a story of the American Dream that resonates across cultures and communities.  This message is echoed in the Foreward for Power Shift penned by former Secretary of Defense Hon. Leon E. Panetta.

A statewide book tour for Power Shift at colleges and universities culminated at an event at the State Capital hosted by Governor Gavin Newsom with California legislative and political leaders. Mr. Pla and his co-author Mr. David Ayón are currently working on two follow up books that will constitute the “Power Shift Trilogy”.  In addition to the books, planning is underway for a Power Shift documentary and a policy institute at California State University, Los Angeles (Cal State LA).

George L. Pla’s recent philanthropic and civic activities include serving as a member of the Board of Trustees of the California Science Center, where he chaired the planning and engineering efforts of Cordoba Corporation’s historic transport of the Space Shuttle Endeavour and ET-94 fuel boosters through the streets of Los Angeles.

He is a co-founder of the City Club, a premier private club in Los Angeles that embraces and reflects the diversity and spirit of the city.  In addition, he is a member and former Co-Chair of the Southern California Leadership Council, a non-partisan, non-profit public policy partnership comprised of  business and community leaders, including three former governors.  Mr. Pla also served on the Board of Directors of the Catalina Island Conservancy, which stewards approximately 42,000 acres through a balance of conservation, environmental protection, and education.

Mr. Pla’s support for academic institutions includes serving as a Regent Emeritus at Loyola Marymount University, as a member of Program Advisory Committee for Stanford University’s Construction Institute, and as a Presidential Associate at the University of Southern California (USC). At USC, Mr. Pla currently serves on the Board of Councilors for USC’s Sol Price School of Public Policy.  In addition, Mr. Pla is the co-founder of USC’s Latino Alumni Association.

Mr. Pla’s support for educational institutions also includes serving on the California Community Colleges Chancellor’s External Leadership Advisory Council; President’s Advisory Council at Cal State LA; Philanthropic Foundation Board of Governors at California State University, Fullerton; Development Council for the Thomas and Dorothy Leavey Center for the Study of Los Angeles at LMU; and Board of Advisors for the Luskin School of Public Affairs at the University of California, Los Angeles.

In addition to supporting worthwhile non-profit organizations across California, Mr. Pla’s and Cordoba Corporation’s philanthropic efforts also extend to national institutions.  In 2017, Cordoba Corporation announced a gift of $200,000 in support of Latino history initiatives at the Smithsonian’s National Museum of American History. The gift will allow the Museum to expand its efforts, focus and scholarship on Latino history by highlighting contributions to the political, social and cultural landscape of the United States.

Mr. Pla’s commitment to employee development, social justice and diversity / inclusion is reflected in a new workforce development initiative recently established at Cordoba Corporation called “Pathway to Success”.  In response to the social justice issues that came to the forefront during summer 2020, Cordoba Corporation established Pathway to Success to develop employable individuals from economically neglected or disadvantaged areas into valuable and successful employees for Cordoba Corporation and other participating firms.  The pilot program was initiated in August 2020.  Participants receive paid training, including rotational on-the-job training assignments in Cordoba’s sectors, professional development opportunities, mentorship, and ultimately program graduation — and a permanent job offer.

For his philanthropy and community service, George L. Pla has been recognized by several educational institutions and community organizations, including USC, which honored Mr. Pla with its prestigious “Alumnus of the Year Award”.  USC’s Sol Price School of Public Policy recently recognized Mr. Pla during its year-long 90th Anniversary Celebration in 2019 as a “Price Pioneer” and featured Mr. Pla in a special video in which Mr. Pla is commended for exemplifying the school’s mission through his professional leadership and dedication to diversity.

Cal State LA has recognized Mr. Pla’s contributions to the school and the community with several honors, including the “Alumnus of the Year Award”, the “Joe Shapiro Humanitarian Award” and the “Presidential Medallion”. The medallion is bestowed upon individuals who have displayed outstanding leadership and extraordinary service to the students and faculty of the university.

For his commitment to the community college system and his alma mater, East Los Angeles College (ELAC), Mr. Pla has been awarded the prestigious California Community Colleges “Distinguished Alumni Award” and ELAC’s “Alumnus of the Year” award.

Mr. Pla has been named by Hispanic Business Magazine as one of the 100 Most Influential Latinos in the nation and Latino Leaders Magazine recently honored Mr. Pla in 2020 with the “Maestro Award for Entrepreneurship”.

In 2022, Mr. Pla was recognized by the California Latino Legislative Caucus in the State Capitol with the “Latino Spirit Award,” which highlights positive role models within our diverse Latino community.  In addition, he is the 2022 recipient of the Museum of Latin American Art’s prestigious LEGADO Award for Philanthropy.

In addition to his service on non-profit, educational and civic organization boards, George L. Pla was appointed in November 2019 by Governor Gavin Newsom to the Los Angeles Memorial Coliseum Commission.  In January 2021, Mr. Pla was unanimously elected to serve as President of the Commission.

George is a graduate of Cal State LA and holds a Master of Public Administration from USC. His civic and business achievements are featured in several books, including Hispanic USA, Nine Nations of America, CEOs Speak Out, Eastside Landmark, Building Bridges of Understanding, and Change from the Inside: My Life, the Chicano Movement, and the Story of an Era.