Home  /  News/Media  /  News  /  Cordoba’s George L. Pla Honored with Award Recognizing His Enduring Work to Give Back to the Community

Cordoba’s George L. Pla Honored with Award Recognizing His Enduring Work to Give Back to the Community

In honor of his enduring work to give back to the community, Cordoba Corporation President & CEO George L. Pla was presented with the Chauncey Alexander Social Activism Award by the 72nd Assembly District Alliance (ADA) at the 18th Annual Celebration of Our Flag Event on June 16, 2018 at the Teamsters Local 952 Union Hall in Orange, California.

The award is named after Chauncey Alexander, a Southern California social worker and activist who was known for his pioneering work to advance the profession of social work, as well as his efforts supporting veterans and the rights of racial, religious and cultural minorities. 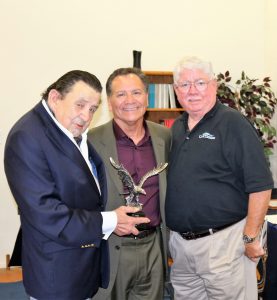 “The 72nd Assembly Democratic District was honored to present the 2018 Chauncey Alexander Social Activism Award to George Pla as he has always exemplified the true meaning of ‘Giving Back'”, stated Raymond L. Cordova, 72nd ADA 2018 Flag Day Co-Chair. “Many ‘Pay it Forward’ and George goes both ways by ‘Giving Back’ and also ‘Paying it Forward’.  We do not have to Make America Great Again, George Pla Keeps America Great!”

In his acceptance speech, Mr. Pla shared about his experience coming to America as an immigrant and he spoke to the plight immigrants are now facing both at the border and here in America.  Mr. Pla noted that his family, like thousands of others, came here to America to raise their families and to give back to their local communities. He cited his own experience growing up in East Los Angeles and how affordable and available public education provided through California’s Community Colleges and the State College system provided him with the foundation to build his life here in America.

In closing his remarks, Mr. Pla stated, “I am proud to be here today to honor the flag as an immigrant, as someone who has lived the American Dream here in California.  I accept this award, humbled and grateful to be here.”

About Cordoba Corporation:  Founded in 1983, Cordoba Corporation is statewide full-service engineering, construction management and program management firm specializing in the delivery of infrastructure projects in transportation, education, water and energy sectors.  Cordoba Corporation, which has offices in Sacramento, San Francisco, Chatsworth, Los Angeles, Santa Ana and San Diego, has been recognized by Engineering News-Record as a Top 50 Program Management  Firm and Top 100 Construction Management-for-Fee Firm  in the nation, as well as a Top 100 Design Firm in California.