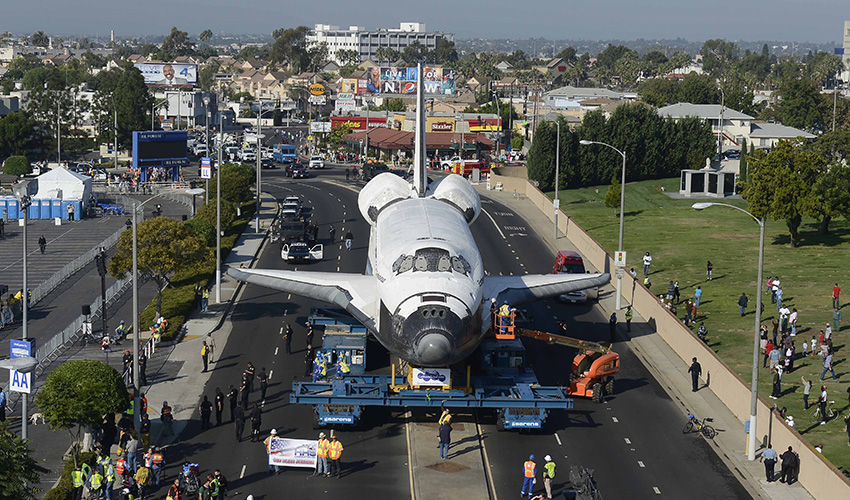 Cordoba Corporation was an integral part of a team of consultants selected by officials of the California Science Center to contribute expertise and resources to assist the Center in the planning, engineering, and execution of the historic transport of the shuttle. Multiple organizations and government agencies were involved in this major logistical undertaking. Approximately 122 feet long, with a wingspan of 78 feet, and a height of 58 feet to the top of its tail on self-propelled mobile transporters, the Space Shuttle Endeavour arrived at LAX on top of the NASA 747 Shuttle Carrier Aircraft and had to be moved to the California Science Center along 12 miles of urban streets.

Cordoba Corp drew on its transportation planning expertise to thoroughly analyze and document all of the temporary clearance work needed along the 12-mile route from LAX through the cities of Inglewood and Los Angeles, and performed field verification of all obstructions in order to determine a route that minimized the impact on the surrounding communities. As a result of Cordoba Corporation’s extensive field review and analysis, a path was developed that decreased the number of items that needed to be cleared by 50 percent. Cordoba Corporation was responsible for design, construction oversight, and coordination of the temporary removal of street services along the route, which included signal poles, light poles, street signs, parking meters, etc.

Cordoba Corporation professionals were recognized by the California Science Center, mayors of the cities of Los Angeles and Inglewood, the California Legislature, and Engineering News-Record Magazine for the planning and execution of this historic move. Collaboration included coordination with the Los Angeles Department of Water and Power, Los Angeles World Airports, Los Angeles and Inglewood city authorities, NASA, Caltrans, LA Metro, AT&T, Time Warner, other telecom companies, area residents, and many other affected parties.